Interestingly, Just a few months back, I had written an article in a quarterly newsletter for one of the hospitals that I work at.

Ultrasound in commonly used in early pregnancy to check for fetal viability and to date the pregnancy. About 2 – 10 % of pregnancies report incidental findings of an adnexal mass. The vast majority of adnexal masses are benign. However, about 1 – 6 % of these masses are malignant.

Symptoms of early pregnancy such as abdominal bloating, nausea and vomiting, back pain, and urinary symptoms signs are similar to that of ovarian cancer.

Ultrasound serves as a dual-purpose tool. It helps identify adnexal masses in an acute setting, and it characterizes the masses as well. However, ultrasound is not sensitivity enough to reliably diagnose ovarian malignancy on its own. The size of the adnexal mass is also not a reliable predictor. Masses less than 5cm in pregnancy are very rarely malignant. 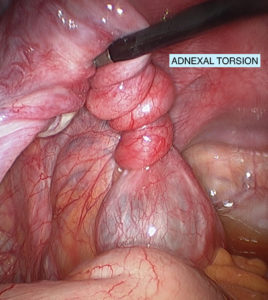 Adnexal cyst seen with twists in its pedicle ( torsion) 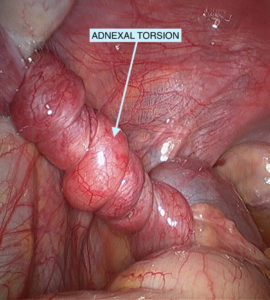 Tumour markers are not reliable indicators of malignancy in pregnancy. CA 125 antigen levels are variable in pregnancy and reach their highest peak in the first trimester. Low-level elevations are not associated with malignancy. An unexplained elevation in other tumour markers (alpha-fetoprotein, inhibin A), used for 1st-trimester screen, can be a sign of an ovarian germ cell tumour.

Most adnexal ovarian cyst noted at first-trimester ultrasound are asymptomatic, simple and measure less than 5 cm in diameter. These are functional, or corpus luteum cysts and approximately 70 % resolve spontaneously by the early part of the second trimester. A reasonable option in these patients is to maintain surveillance with ultrasound in every trimester.

Complex cysts measuring more than 5 cms are most likely to persist. Asymptomatic corpus luteal cysts, endometriomas, and mature teratomas (dermoid) can also be managed expectantly during pregnancy if the diagnosis is reasonably certain based on the sonographic characteristics

Surgical resection minimizes the risk of complications such as rupture, adnexal torsion or obstruction of labour and aids in the detection of ovarian malignancies. A tumour that shows the following features should undergo a surgical resection, as they are more likely to be malignant.

An ovarian cystectomy is preferred over a salpingo-oophorectomy when the pre-operative evaluation suggests a benign pathology. If the mass has solid components or features suggestive of malignancy, a consultation with a gynae-oncologist is prudent at this stage. A frozen section should be ordered followed by a unilateral salpingo-oophorectomy and biopsies of all suspicious areas.

Laparoscopy is safe in pregnancy, however, is technically difficult to perform in late 2nd trimester due to the gravid uterus. Where technically feasible a laparoscopic approach is favoured. Laparoscopy is associated with significantly less operative time, perioperative morbidity, the length of hospital stay, postoperative pain and can be used for staging in apparent early-stage ovarian cancer. Laparotomy is performed when there is a suspicion of malignancy. However, it is associated with post-operative morbidity including increased risk of thromboembolism.

Outcomes: Though there is a paucity of data regarding fetal outcomes following adnexal surgery, women who have undergone adnexal surgery did not show an increase the risk of congenital malformations. However, they are at risk of miscarriage (4-7%) and preterm birth (12 %).

In summary, the majority of adnexal masses diagnosed in pregnancy are benign and will resolve spontaneously. They require ongoing surveillance in each trimester. Tumours that have suspicious features should be promptly referred to a specialist or tertiary centre for further evaluation and management.

At AEVAFEM, our specialists will take the time required to make you feel comfortable, alleviate the uncertainty of having a gynaecological procedure or surgery and help you make an informed decision on the best treatment solution for you.

Disclaimer: The information provided does not constitute medical, professional or expert advice. Every effort has been done to provide accurate information at the time of printing / publishing, but no warranty as to its accuracy is given.Users should seek professional medical assistance if they are suffering from any medical problem.